Android 3.0 will be called Gingerbread and will focus on offering a sleeker, friendlier user experience.


“Gingerbread”, the code name for the next version of Android, is a name we’ve had pegged ever since Cupcake flew off the shelves a year ago, but what’s more interesting is that Google’s going to give the smartphone OS an interface re-vamp with this new version.

The aim of this is twofold — to lure manufacturers away from plastering their own UIs on Android and, of course, to tackle the iPhone’s new iOS4, the latest version of the iPhone OS. It’s a bright move. Once Android 2.2 is released for more phones, the Android feature set will be virtually complete. Now it just needs to catch up with Apple in the slick-ness category, which will also bring in less hardcore mobile users. Android still has the feel of an early adopter’s platform, although that’s finally ebbing away.

More important is the Android update issue that stopping manufacturers from using their own UIs would solve. Whenever Google releases a new Android OS, manufacturers have to tweak their UI code, delaying the release of the update — for a whole year in the case of the HTC Hero. Stay tuned for more on Android 3.0.

Only a smattering of people have Android 2.2 on their phones, but Google’s already talking about Android 3.0, confirmed as the next version of the OS. Could this be the real contender to the iPhone 4’s smartphone lead? Read on for the arguments…

It’s the real next-gen Android OS
Android 3.0 will focus on improving the user experience of Android, and that’s the one thing we’ll admit Apple still does a lot better than anyone else. Using an iPhone is seamlessly slick — there may be a lot of awful apps for iPhone, but they never tarnish the slick ‘n’ shiny core iPhone experience. Android 3.0 is still too far off for us to tell how Google’s going to revitalise the Android UI, but we’re hoping for something special. Judging by the current Android launch schedule, we won’t see Android 3.0 land until the end of the year, at the earliest.

The early adopter phase is coming to an end
Android was the perfect early adopter’s platform when it arrived. It allowed you to fiddle around more than almost any other smartphone platform, it was a bold underdog and it’s named after a sci-fi construct. What more could a geek want? With “sexy” Androids like the HTC Desire making Android an attractive alternative for those that don’t have a subscription to Star Trek magazine, and devices like the tiny Sony Ericsson Xperia X10 Mini opening the platform up to those that don’t want a hulking great big smartphone, this early geek phase is almost over. Match this mainstream recognition with a more accessible interface and you have a winning combo.

It may solve the fragmentation issue
Part of the reason Google is setting out to improve the UI of Android with 3.0 is that it wants to dissuade manufacturers from loading the OS with their own interfaces — such as HTC Sense and Sony Ericsson’s Mediascape/Timescape. Why? Because it’ll virtually solve the Android fragmentation issue in one sweep, if everything goes as Google hopes. Without additional software lumped on top of the bare OS, updates will be able to rolled-out much more quickly. Google may want to gives its own phones the exclusive for a while, but there’ll be no more waiting six months for an update to arrive as HTC/Sony Ericsson/Motorola fiddles around with its own user interface to get it working with Android x.x.

It’s too late to tie the loose ends together
androidhellGoogle stating its good Android intentions is all very admirable, but saying you want to change things is different to actually doing so. In order to achieve its goal of catching up with iPhone and solving the fragmentation issue, Google would have to do a 180 on its Android policy. In short, it would have to become Windows Phone 7.

What do we mean? At the root of Android’s problem is that it strives to be open, embracing difference and change. Manufacturers can do what they want with the Android OS, to an extent, and it is what has caused the legion of compatibility problems that are part of the experience of any Android phone. Windows Phone 7 side-steps this problem by cutting out the manufacturer customisation of the OS and forcing phone makers to stick to a very limited set of hardware profiles. Keep your phones looking similar and they’ll play along happily.

A change of interface alone isn’t going to alter the way manufacturers or buyers approach Android in the game-changing way that’s required. And Google’s not going to go all Microsoft on us with its hardware guidelines either, is it?

Manufacturers want to put a stamp on their phones
To improve the basic Android interface isn’t the only reason manufacturers use their own Android UIs. They care more about them than we, the buyers, do. They care because they’re desperate to prove that their phone needs to exist, has a reason to be. Forging this interface identity for a phone has become as important as making sure it’s packed with Wi-Fi and 3G. Unless Google enforces non-customisation, we think manufacturers won’t stop making their own UIs.

The question of whether it’s better to have a glitzy interface or an up-to-date Android has come to the fore recently, in the battle between the Google Nexus One and the HTC Desire — phones based on the same hardware design. The Desire has Sense, HTC’s custom interface, but the Google Nexus One has Android 2.2. Which would you prefer? Bear in mind it could be months (and months) before we see the HTC Desire Android 2.2 update released.

It’ll forever be tarred with the geek brush
Android may be stepping out of the early adopter basement and into the sun, but the framework the platform has set up for itself is a geek godsend, but not so good for the “norms”. Android is only at the height of its powers once you’ve spend a handful of hours tinkering, customising and fiddling, replacing a few core elements with things from the apps junkyard that is the Android Market. A new Android 3.0 interface won’t change this because it’s something that’s embedded under the skin of the Android platform. It’s in its little Android bones.

Even if Google did try to reverse this geek factor, it’d be turning its back on the progress it’s made in the last two years. Android isn’t perfect, but it is good, so that’s simply not going to happen.
Diposting oleh Galaktus di 21.04.00 2 komentar:

The organisation behind the Bluetooth format, known as the Bluetooth SIG, has unveiled the specification of the next version of the universally accepted short distance wireless connectivity technology. That said, this iteration is expected to reach 200 feet or roughly 66 metres, which would rival some WiFi coverage althogh throughput is likely to be only a fraction. The fourth version of Bluetooth will focus on slashing the amount of energy consumed by BT equipped devices and the executive director of the Bluetooth SIG has high expectations on the low power credentials of the future version of the platform. Michael Foley said that products compatible with the technology will be able to run on button cell batteries for years rather than hours, which would possibly mean a thousand-fold improvement on today's performance. Bluetooth v4.0 is expected to appear in new products towards the end of the year with mass market status reached by next year. The technology is likely to be built in highend smartphones first and portable computers. There are also talks that we could see it in watches, remote controls and other ubiquitous very low powered devices that populate households and businesses. BT 4.0 is likely to face heavy competition from the proponents of NFC (near field connectivity), Zigbee, Nokia-backed WiBree and Z-Wave.
Diposting oleh Galaktus di 06.20.00 Tidak ada komentar:

U8500 - THE BEST SMARTPHONE PLATFORM.

U8500 - THE BEST SMARTPHONE PLATFORM.

The U8500 is the first integrated Smartphone platform to offer the latest SMP (Symmetric Multi- Processing) dual core technology in a high- performance, low-power and cost-optimized solution for all major open software platforms. The U8500 is the first mobile platform with full High-Definition 1080 progressive-scan camcorder capabilities. With its combination of a dual-core SMP processor and a high-end 3D graphics accelerator, the U8500 enables a full web- browsing experience for next-generation smartphones. 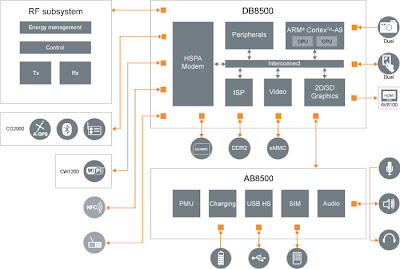 U6715 - A HIGHLY- INTEGRATED HSDPA PLATFORM BUILT ON LINUX™⁪

U6715 - A HIGHLY- INTEGRATED HSDPA PLATFORM BUILT ON LINUX™⁪

The U6715 is a highly-integrated 3G HSDPA capable platform built on the Linux open operating system, with a cost-optimized chipset and software to enable Smartphone features for all.

By integrating an elegant and powerful multimedia engine in hardware the ARM ™subsystem of the U6715 can be offloaded leaving extra mips for applications. Furthermore, this platform sets the standard for long battery life in a 3G Smartphone platform.

- Enabling Android™⁪ Smartphone for all
- Brings all the advantages of a Smartphone but at the price of a feature phone, without compromising on things that matter, such as power consumption and size
- Setting the standard for battery life in a 3G Smartphone
- 3G talk time up to 7 hours, 3G stand- by time up to almost a month on a 1000 mAH battery
- Supports QVGA and WQVGA displays and touchscreen capability
- All the features you expect in a Smartphone: Access to Applications stores and Social Networking, Web browsing, Multimedia, Touch screen, Bluetooth, Wi-Fi, GPS 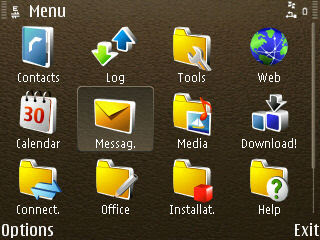 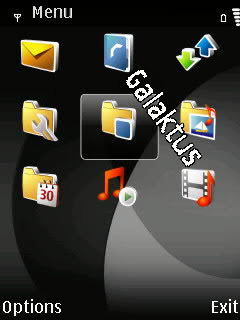 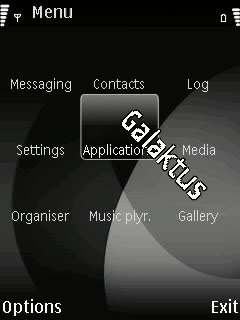 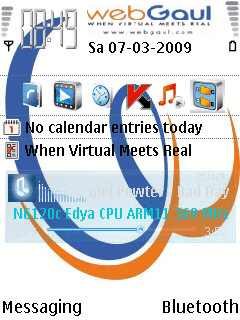 1.03 update
- MapDrives no longer needed, mapping drives code is now built-in HelloOX, that's mean hacking is much more easier, one app does all the step!(credit must go to FCA00000)
- All mapped drives would remove automatic, no reboot needed for removing them
- Since ROMPatcher doesn't works on some FP2 device, installing it is now an optional for FP2 user, no patches would apply and add to autostart, must do them menual
- Some guys complain cannot play N-GAGE games, the main problem is open4all patch applied. So, all ROMPatcher patches would not add to autostart on all device, must do it menual if you want
- Install rootCerts option removed from Pre FP1 & FP1 device, because installserver is enough. If you wanna install it, please install it menual from E:\HelloOX\updaterD.sisx before uninstall HelloOX
- Install Modo(a TCB file manger by leftup) is now an optional for all device
*If you hacked your phone already, you don't have to use this update version to hack it again! An update just make this app better, it will not hack for more!*


The easiest way to hack!

notes:
FP2 & 5800 doesn't have a working installserver yet! However, ROMPatcher working on some of them.
If RP works, the ChangeSWIpolicyPath patch can let you install some unsigned apps, otherwise please
sign your apps with leftup cert&key pair included in this package.